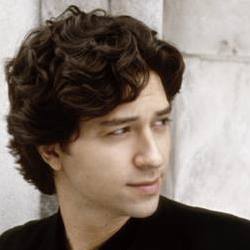 Sergio Tiempo is regarded as one of the most individual and thought-provoking pianists of his generation. He made his professional debut at the Amsterdam Concertgebouw aged fourteen and soon became internationally renowned for his raw energy and musical versatility, from Brahms to Villa-Lobos and Ginastera.

Whilst at the Fondazione per il Pianoforte in Como, Italy, he worked with Dimitri Bashkirov, Fou Tsong, Murray Perahia and Dietrich Fischer-Dieskau. He continues to receive frequent musical guidance and advice from Martha Argerich and Nelson Freire and performs regularly with fellow-countryman and friend Gustavo Dudamel.

Recent highlights have included an eight-concert tour across US and Europe with the Los Angeles Philharmonic and Gustavo Dudamel, performing Ginastera’s First Piano Concerto in the composer’s centenary year, a residency with Queensland Symphony Orchestra and his debut with the Boston Symphony Orchestra.

A committed recitalist, engagements have included a sell-out recital debut at the Queen Elizabeth Hall in London’s International Piano Series, the Vienna Konzerthaus, the Wigmore Hall, the Berlin Philharmonie and Edinburgh International Festival as well as return visits to the Oslo Chamber Music Festival, Warsaw Chopin Festival, Music Days in Lisbon, and recital tours in China, Korea, Italy, and South America. Sergio Tiempo performed at the Martha Argerich Festival in Lugano each year, with recital partners including the formidable Mischa Maisky, Nelson Freire, and fellow pianist and sister Karin Lechner.